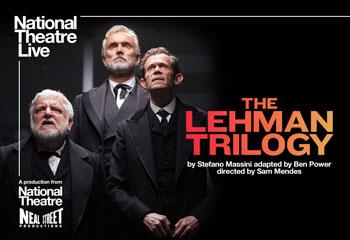 
The story of a family and a company that changed the world, told in three parts on a single evening. Academy Award-winner Sam Mendes directs Simon Russell Beale, Adam Godley and Ben Miles who play the Lehman Brothers, their sons and grandsons.

On a cold September morning in 1844 a young man from Bavaria stands on a New York dockside. Dreaming of a new life in the new world. He is joined by his two brothers and an American epic begins. 163 years later, the firm they establish – Lehman Brothers – spectacularly collapses into bankruptcy, and triggers the largest financial crisis in history.

Safety is our priority

We have comprehensive and strict safety measures in place to maintain a safe environment for cinemagoers and staff. We ask that all visitors read these before coming to the Halls.

To avoid disappointment, we encourage all customers to book cinema tickets in advance when possible as due to social distancing measures there is reduced seating available.

In line with government guidelines, you are only allowed to sit next to people from your own household or those in your support bubble. In the cinema you will be seated at least 2 metres apart from other groups.

Please be aware that from Saturday 8 August you will need to wear a face covering inside Dorking Halls.